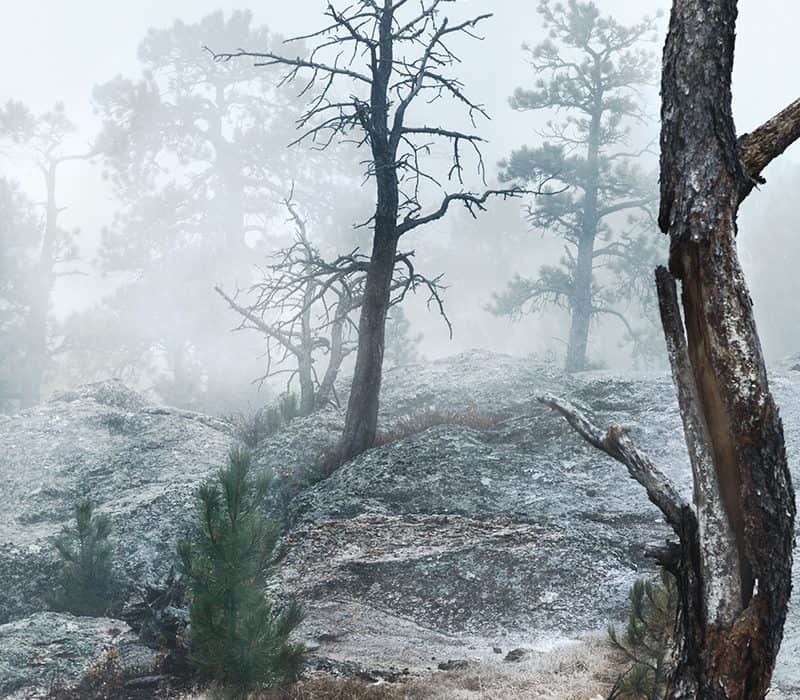 Finding My Way Through The Fog

Some Black Hills mornings just aren’t meant to be captured as sunny photographs. This was one of those mornings.

My wife and I were spending a week camping in Custer State Park in Western South Dakota. On the second to the last morning, I crawled out of the camper early to photograph what was sure to be an incredible sunrise from the Norbeck Overlook in the Black Hills. The overlook is one of the highest points in the Black Hills National Forest. Or, South Dakota for that matter. A great starting point for a visiting photographer.

Driving slowly on Norbeck’s single-lane road, I kept an eye out for the dozens of deer I had already seen enjoying breakfast. When I reached the highest elevation, I idled in a pull-in and took care of my caffeine craving. Maybe a little light would break through the thick San Francisoesque fog.

After a cup of home-brewed espresso – no Starbucks for this photographer – I jumped out of my rig, grabbed my camera and pod and decided to enjoy the eerie silence.

After a short hike and a pit stop at the pit toilet, I found this really cool old oak growing out of a the blue granite. The tree was draped in a velvety fog that I watched move with the streams of cold mountain breeze.

I made several exposures and explored a few different angles. The peeling trunk of the dead tree in the foreground of this photograph appealed to me. It frames the image and creates a sense of depth.

For more information about The Norbeck Overlook in the Black Hills of Western South Dakota, click here.