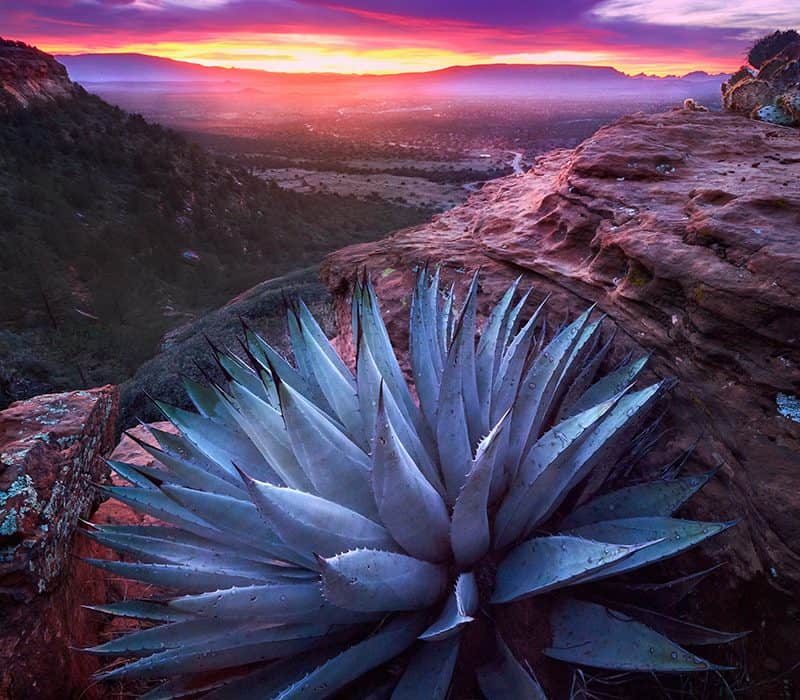 When my wife, Nora, and I were first married we were broke. 39 cents in our checking account broke. Ramen noodles as an entree broke. Consequently, we spent our honeymoon in Cincinnati, OH – close to our home in Louisville, KY – where my wife grew up and where we lived at the time. It was a quick, cheap trip for we, the moneyless.

Don’t take me wrong, Cinci is a cool city. Vibrant art scene and authentic German food, but not quite the tropical beach vacation we had envisioned. So, when my wife and I neared a milestone anniversary in October, we planned a quick get-a-way from Sioux Falls, South Dakota to celebrate two decades of matrimony. Regrettably, the whole work thing got in the way like it always does. As such, we had to postpone our Sedona, Arizona landscape photography adventure until November when we could both head out with a clear mind.

Our Camera Bags Packed, We Were Ready To Go

It was an early November evening when we flew into the Phoenix Mesa Gateway Airport via Allegiant Airlines. From Sioux Falls it’s a couple of hours in air. And, best of all, non-stop. We rented a car and spent the night in Chandler, AZ. Neither Nora nor I had spent much time in Arizona and were unfamiliar with the opportunities for landscape photography. For that reason, our first stop the next morning was a local coffee shop.

First of all, I love espresso and need it like a our, high drive, Czech-line German Shepherd, Zeppelin, needs his tennis ball. Second, if I don’t have my morning fix, I’m grumpier than a mime in handcuffs. Ask my wife. She’s had to calm my caffeine cravings for the past 20 years. And third, mom-and-pop coffee shops are an incredible source for local travel information.

We found The Grove Coffee using Yelp. While waiting at the pick-up counter for our coffee, we explained our situation to the young barista. She was kind enough to listen and even kinder to sit at our table for at least 20 minutes while describing some of her own Arizona adventures and provided a ton of solid landscape leads. One of her location suggestions was Doe Mountain near Sedona.

With coffee in hand, we navigated through the morning Phoenix traffic and wound our way up I-17 out of the valley into the higher elevations. We exited the interstate at AZ-69 which eventually intersects with Arizona State Route 89-A in the Prescott Valley. Pronounced Pres-kit if you’re from there.

We found several photography-worthy vistas and BLM (Bureau of Land Managment) turnoffs as we maneuvered the rental along 89-A. Unfortunately, we had planned to hit Sedona by sunset and the afternoon light really didn’t lend itself to landscape photography. I made a mental note for our next visit.

We spent the next four days exploring the seductive city of Sedona, Oak Creek Canyon and trails in the surrounding area. The mild November Sedona weather was much more enjoyable than what we were experiencing in South Dakota. So much so in fact, we picked up a few real estate flyers. One can always dream, right?

“What can be said about Sedona that hasn’t already been said a thousand times. The city and surrounding area is, simply put, beautiful.”

We found the trailhead to Doe Mountain in the Coconino National Forest on our last full day in Sedona within a few miles of the city center. It was a sunny autumn day with high temps reaching the low 60s. I had explored another photography location that morning for sunrise photography, consequently, we were running late and by the time we grabbed coffee, ate breakfast and hit the (trail) head it was about noon-ish.

I’ve started researching the trail ahead of time using AllTrails, one of the many available hiking apps for iPhone. This process helps me decide what camera gear to pack. The Doe Mountain trail carried a moderate rating, so I scaled back a bit and decided to bring only my Canon 5Ds body, 2 lenses, a few filters and a small travel tripod. The lens that I ultimately left behind was an extreme wide angle 11mm-24mm zoom. I love using it, but at almost 3 lbs, it’s a beast. After an overloaded hike to the top of Zion’s Angels Landing in Utah last May, I’m learning to pack light.

As we made our way up the switchbacks, we passed a young woman with a huge grin on her face that proudly announced that she was celebrating her 83rd birthday with a hike. And, not far behind, a young family carrying their infant in a sling. How cool.

We found the trail end within an hour or so. As we climbed the natural rock steps to the top, I noticed this beautiful, large Agave plant. It was positioned in the foreground of a breathtaking view down the valley and aligned exactly with what I anticipated to be the perfect position of the sun when it set.

I sat there and stared at the blue-green plant for a few minutes. I could feel my wife’s military-grade, jedi mind-vodoo penetrating my thick skull. She didn’t speak, but I heard, “We’re staying here until sunset aren’t we?” I nodded. She knows the photographer in me too well.

We ran into several others while we were waiting. One being, Jose, another restless soul and traveler like ourselves. The lone hiker introduced himself and after a little travel conversation mentioned that he owns Faded Barber Shop in Santa Ana, CA and offered me a free straight razor shave next time I’m in the area. We figured out where to eat that night (Pisa Lisa – yumm) and solved a few of the world’s problems. Jose promised to visit us in South Dakota. I told him to wait until at least July when it’s above 20 degrees.

Nora and I spent about four hours in total just hanging out on the top of Doe Mountain talking and taking in the Sedona views. Something we don’t often take time do anymore. She only covered her eyes once when I hung over a cliff to get a shot of an old tree.

It’s funny, the more landscape work I do, the more I feel like someone or something is trying to tell me something. And the whispers are growing louder with each trip. “Slow Down” they say. Who knows, maybe the voices in my head are finally starting to take over.

A little before sunset, Nora started the hike back down with Jose while I set up my shot. I made several exposures with the sun gradually setting behind the purple ridges to the west. The sky turning an intense purplish magenta as twilight approached.

It’s always been difficult for me to stop shooting when I’m in a groove. Especially when the photography gods present me with an opportunity like this. “Just one more shot” usually turns into another 50 or 200.

Day light was disappearing quickly and the Sedona darkness was taking over when I packed up and hiked down with the beam from my flashlight leading the way.<<

For more information about Sedona, Arizona visit the official Sedona Tourism Website here. And if you happen to be cruising through Santa Ana, CA stop in for an old-school shave and cut at Faded Barber Shop – they use straight razors.