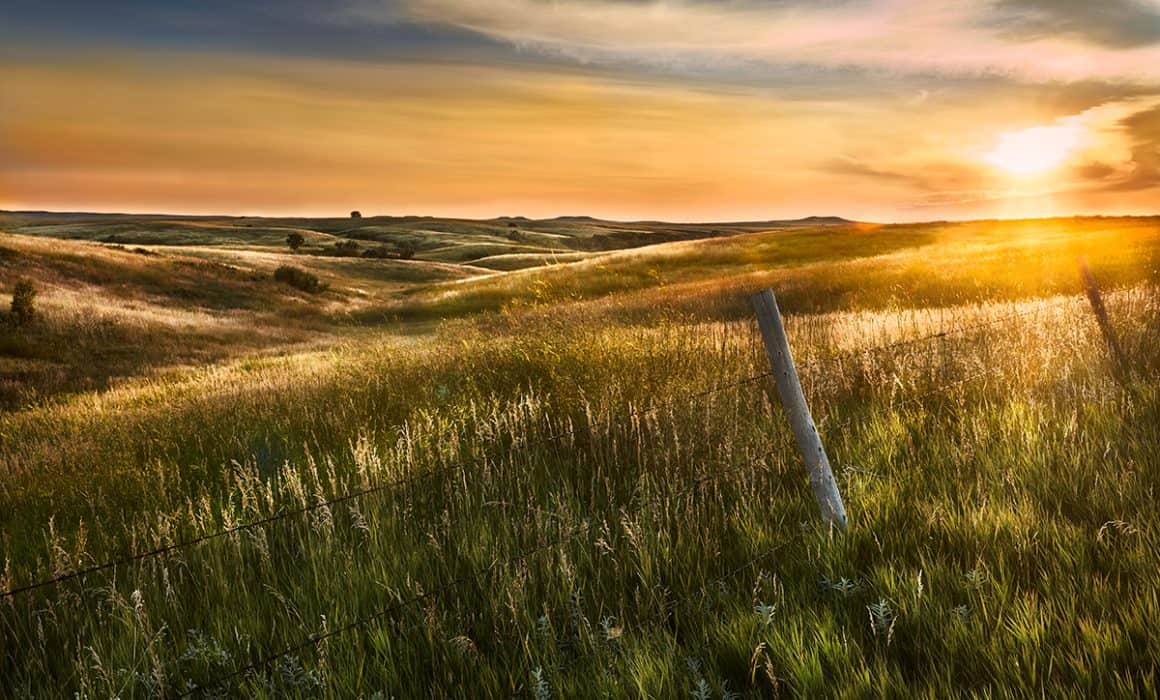 Recently, I found myself on a solo landscape photography trip exploring South Dakota. My goal was to capture some of my home state’s more obscure landscapes. I was on travel day three, so my thoughts were still relatively normal. Let me explain.

I travel alone a lot. Which leaves me alone with my thoughts. A lot. The more miles, the more strange those thoughts become.

A few hours from home, my thoughts are fairly mundane. Did I pack enough coffee? I hope the linebacker that the Cowboys picked up in the draft works out. What’s that noise? Sounds like my rear wheel.

After about day seven, I’ve usually become bored with myself and my thoughts can go one of two ways:

Weird: If I were bit by a spider like Peter Parker and suddenly became Spiderman, would I tell anyone? Or would I keep it a secret, so I could do cool Spiderman stuff on the sly.

Deep: The universe is billions of trillions of years old. If life in other galaxies does exist and extra terrestrials possess the technology to visit earth, would their civilization’s time line match up with ours? Or would they have visited our planet in the distant past during the time of the dinosaurs?

Told you. Weird and deep. But, keep reading. This whole story will have a point. I promise.

I had just left the small city of Aberdeen where I grew up and was heading west on US Highway 12. Back in the day, US 12 was a major thoroughfare, running from Washington State, where it intersects with the 101, then meanders through Idaho, Montana, Wyoming and South Dakota. Eventually, ending in downtown Detroit. Parts of US Highway 12 still survive, although most have been absorbed by I-90 and I-94.

However, in this part of South Dakota, US 12 is a two lane road. No median. Despite the 70 mph speed limit, travel is gruelingly slow given that you usually find yourself behind a grain truck, a little old lady doing 17 mph or a farmer checking fields. More likely, all of the above. You learn quickly not to be in a rush. Which, for a landscape photographer, has merit.

Additionally, there are small towns spaced every 30 miles whose posted road signs decrease your speed gradually from 70, to 55, to 35. And then back up to 45 and then 70 again. Yo-yo driving at its best.

I rode the brakes passing through the small towns of Roscoe, Bowdle and Ipswich – all with populations under 1000. Next up was Selby and then Mobridge, South Dakota where I planned to camp that night.

It was closing in on three in the afternoon when I arrived at my destination. I fed my espresso addiction, filled gas, scoped out two possible campground choices and registered at the second – The Bay at Grand River.

Mobridge is located on the bluffs of the Missouri River in north central South Dakota. The campground I choose was located on the west side of the Mighty Mo where it intersects with the Grand River. My campsite was within a stones throw of both.

MO Bridge was originally chosen as the crossing point for the Chicago, Milwaukee and St. Paul Railroad. Telegraph transmissions from the Missouri bridge site were marked with “MO Bridge,” giving the small town its name.

The plan was to spend the rest of the afternoon scouting a location for a sunset shot. As I drove the gravel roads, I started thinking of who I knew from Mobridge. My first “steady” girl friend, Danielle, came to mind. Danielle had moved from Mobridge to Aberdeen when she was in 7th grade. We met each other as 8th graders through a mutual friend. I still remember the first movie we saw together, Jonny Dangerously. And, I can still summon the image of her trudging through a snow-packed, street light lit field near my house to accept a tiny, heart necklace I had bought with my weekly allowance. All four dollars of it.

Dani was from the “other, higher-end side of the tracks” and went to a different junior high school. How exotic, eh? Consequently, the romance was short lived. Despite the split, we remained close friends through high school and into college. As our life paths went in different directions, our contact became less frequent.

Nevertheless, we still keep in touch, having lunch every few years. I’d just recently spoke to Dani and learned that her mother had been diagnosed with breast cancer. And that she was undergoing treatment, but fortunately, was responding well. As I drove the gravel roads near Mobridge, I thought about how short life is. How harsh it can be.

I know, everyone says that. Life’s Short. YOLO. Hashtags and tshirt brands have been developed around those phrases. But, until someone you know becomes ill, does the point truly hit home. When someone in your life has to deal with chemo or radiation. When they may die. I hadn’t seen Dani’s mom, Debra, in almost 30 years, but I still felt a twinge of pain.

Pretty. For A Mom.

I’d met Debra, when I began dating her daughter in 8th grade. She was young and pretty. And funny. Note: I had originally written, “young and pretty for a mom”. But, she may well end up reading this and I still would like to remain in her good graces. I’m certain that even now, 30 years later, she doesn’t look a day over 35.

Surprisingly, she never hassled me for calling their house late or for calling too many times a day. Six. I hung out at their place occasionally and she was always friendly and inviting. She always joked with me. Gave me a hard time. I got the feeling she liked me or at least made an attempt.

When I was in junior high, my home life wasn’t the greatest. And that’s putting it mildly. But, after going through teenagerdom with my own daughter, I realize now, that it may have been more me and less my family.

I was a hellion. A stoner. Nonetheless, Debra was always kind and the feeling of acceptance meant a lot to me at a time when I needed it.

As I cruised with my window down looking for a suitable photo location, I wondered if she, like her daughter, had grown up in Mobridge. Driven these same roads listening to the gravel crunch under the tires. Taken in the rolling bluffs and ranch land like I was doing. Did she live in town or on a farm? I’m positive Danielle told me, but I didn’t remember.

The shadows were gradually getting longer and I needed to find a photo location. After all, that’s why I was here. To take photographs. Not to reminisce about my youth.

An hour earlier, I had passed a huge plot of pasture land surrounded by barbed wire and wooden fence posts. While the light hadn’t been suitable then, I wanted to see how it looked a little closer to sunset. I drove a few miles farther and made a U turn at the entrance to the long winding road that leads to the Sitting Bull Monument. Now pointed in the right direction, I headed back towards what I thought would make a good landscape photograph.

As I approached the pasture I had noticed earlier, I was amazed at how golden light can turn an ordinary field of prairie grass into a stunning scene of gradating greens and vivid oranges. Pulling onto the shoulder as far as I could without needing 4-wheel drive, I flipped on my hazard lights and grabbed my camera bag and tripod from the back seat.

I crossed the road and cautiously navigated the sloped ditch, camouflaged with prairie grass, being mindful of badger holes. It wouldn’t be a first to fall on my ass with camera in hand but, nonetheless, I wanted to avoid it.

I walked the fence line another twenty yards and finding level ground, I extended my tripod legs and composed a shot. I positioned the barbed wire and fence post in the foreground back lit by the setting sun on the right side of my frame. The long shadows seemingly reaching towards the camera.

Taking a few minutes to explore different angles and make a lens switch, I noticed dust from an approaching vehicle. A ranch truck eased along side the ditch where I was standing and stopped. I always get a little nervous when this happens, as I could be trespassing on someone’s land

The driver rolled down his window, glanced at me, my camera, then at the scene unfolding in front of us. “Beautiful isn’t it?”. After I replied, “It is”, he gave me a quick wave and pulled back onto the gravel road.

The more I photograph landscapes, the more I reflect on my life and the people who have played a role in it. If even, briefly.

A thought process that is lost in the face-paced world of advertising photography. Maybe it’s being outdoors, the fact I’m just getting older or, conceivably, that I’m alone too long with my thoughts. Who knows.

That evening, I made several exposures of a golden pasture in Mobridge‌ South Dakota. And, as I put my camera back in the bag, my thoughts turned to Debra and her cancer treatment.

Eventually, when I made it back home and found the time to review the images, I’d make it a point to send her a photo of a scene near her home town. Optimistic that it would serve as a gift to celebrate her recovery and also, as a post card of appreciation for her kindness towards an 8th grade hellion when they needed it.

For more information about the Missouri River at Mobridge, South Dakota, click here. The names in this post have been changed to protect the innocent. Accept for Debra who doesn’t look a day over 35.